Ask any strawberry grower in Minnesota what their number one challenge is, and they’re likely to answer “weeds”. Weeds compete with strawberries (and all crops) for light, water, nutrients, and perhaps even pollinators. Too many weeds generally means low strawberry yield and quality.

Typically in perennial strawberry plantings, weeds are managed by tilling, hand weeding, and herbicides; or some combination of the three. Tilling and hand weeding are time consuming and laborious, often adding up to high labor costs for growers. Herbicides, while effective, require careful management and have environmental consequences that many growers are trying to avoid.

Research to the rescue

Much of our strawberry production research over the past 20 years has been focused on alternative, sustainable methods for weed control. Our overarching goal is to make Minnesota strawberry production more profitable and environmentally sound. To accomplish this, we explore ways to reduce overall inputs and improve soil health while producing high yields of exceptional quality berries.

A major component of our recent research has been a shift to an annual production system using day neutral strawberry varieties. This system has many benefits, including the ability to rotate crops annually. This offers a positive step towards effective weed control, since weed suppressing cover crops can be part of that rotation. Within this annual system, our weed control research has included:

Our research has shown that there is no one perfect solution to weed control, and that a combination of tools and methods must be employed to achieve a balance of profitability and environmental sustainability.

So far, the method we’ve found most effective for weed control has been a combination of plastic mulch in the rows and landscape fabric between the rows. This combination virtually eliminates weeds in annual day neutral strawberry systems. However, this combination results in waste products and does not contribute to enhancing soil health. After hearing from growers that they’d like to find ways to reduce the amount of waste in this system, we resolved to explore some alternatives.

The plastic mulch over the raised beds in the rows is so effective at minimizing weeds and reducing fungal diseases, that we decided to keep that and look at options other than landscape fabric for between the rows.

In 2019 we conducted a field trial of three living mulch crops between the rows to determine their weed suppression and soil building qualities. You can read about the background of the project here.

Influence of site and season

We set up same experimental design in two locations. One in Morris at the West Central Research and Outreach Center, and one near Farmington at Twin Cities Berry Company. These two locations had very different outcomes in terms of how well the living mulch germinated and became established.

At Morris, germination and establishment were good for all the living mulches. At Farmington, germination was poor so the mulches never became fully established and did not offer any weed control. (Keep reading to find more about Farminton’s weed control strategies.)

The weather around the time of seeding is critical in establishment. Heavy rain and cold temperatures in spring delayed seeding and made the soil difficult to work. These poor conditions likely contributed to low germination rates at Farmington.

Here is a breakdown of how each of the living mulches performed over the growing season at Morris in terms of establishment and weed control. All crops were planted by hand broadcasting at the same time in early summer after the strawberry rows had been planted, and watered twice to aid in germination and promote establishment.

Winter camelina is a crop that is typically planted in the fall where it then germinates and forms a small rosette and then lies dormant in the soil over the winter before it grows and flowers. With this information, we believed that over the summer camelina would remain in the rosette stage.

We seeded the camelina at 10lb/acre and had very good germination, which led to good establishment. Weed suppression was successful for the first month while the plant remained a rosette. However, likely due to the cool, wet June, the camelina started to flower by early July which caused a decline in weed suppression. The rosette leaves started to senesce which exposed soil, allowing weed seeds to germinate. By the end of August, the camelina plants had very little biomass left. Overall, camelina was unsuccessful at controlling weeds throughout the season.

Winter canola is similar to camelina in its growth and development stages in the way that it requires a dormancy period in order to flower. Again, it was seeded at 10lb/acre and there was very good germination and establishment.

The canola grew quickly into large rosettes, which led to excellent weed control. In fact, the rosettes grew so large that they had to be mowed back four times throughout the whole season to keep them from growing up and over the strawberry rows. This made the canola a relatively high maintenance mulch compared to the others. However, it provided excellent weed control over the entire growing season since its large rosettes left no exposed soil for weeds to grow.

Winter rye is our third living mulch crop, which also needs a dormancy period. The rye was seeded at 60lbs/acre and had good germination and establishment.

The rye maintained a low stature over the season, so no mowing was required. Weed control was very good and consistent over the season as well, but not quite as good as canola. However, when considering weed control and amount of labor for maintenance, rye was superior to canola.

Two varieties of strawberries were used in this experiment, Albion and Cabrillo. Overall, Cabrillo was a higher yielding variety than Albion but both showed a similar trend in yield with the living mulches between the rows.

Landscape fabric was used as the control and was the highest yielding treatment but the rye yields were comparable. Camelina and canola treatments had significantly lower yield for each variety. Albion had slightly higher yields in camelina over canola, and Cabrillo had higher yields in canola over camelina. This indicates that using either camelina or canola might have a slight negative impact on strawberry yields while rye does not.

Two of the three living mulches, canola and rye, were successful at controlling weeds between the strawberry rows at Morris which indicates they could potentially become a practice to enhance the sustainability of annual strawberry production.

The unsuccessful performance of all three living mulches at our farmer-cooperator site in Farmington indicates that more research is needed in order to make regional recommendations on their use for between row weed control.

Landscape fabric the tool of choice at Farmington

Our grower at Farmington, Dr. Andy Petran, observed poor living mulch establishment which led to inadequate weed control and thus lower strawberry yield. Andy has had success with landscape fabric for weed control between the rows, and plans to continue using it. As a scientist and farmer, Andy carefully considered this decision and offered some thoughts on why landscape fabric is his tool of choice:

For Andy and his farm, Twin Cities Berry Company, using fabric makes more sense for managing strawberries on a growing commercial scale. He acknowledges that using the fabric may not contribute to soil health in theory, however he is working to make up for that by growing cover crops in his fields when they are not in production in his annual rotation system.

Experimenting on the farm

The varied success of the living mulches at our two sites is an important reminder that not all practices fit all farms, and that each grower needs to experiment to find out the practices that work best for them.

For growers looking to try these living mulches (or any other new practice), we suggest experimenting at first with a couple of rows to get a feel for the management of the living mulch systems and determining which crops work best for them before expanding the practice to their entire operation.

Looking ahead: Next steps in strawberry weed control

The next step in studying living mulches is to further determine their effects on the soil fertility to get a bigger picture of soil health. Next year, we will plant strawberry rows into areas where the living mulch had previously been grown, and measure strawberry yield. This will provide some insight on the soil building effect of the three mulches.

In addition to continuing experiments with living mulches, we will also be testing more biodegradable mulches for use both between rows and in rows.

And now for something completely different...

In 2020, we will begin a research trial on tabletop strawberries to explore the yield potential, economics, and ergonomics of this alternative method that is becoming popular in Europe, Canada, and other places around the world. Stay tuned!

This research was made possible by a grant from the North American Strawberry Growers Association.

Thanks to Dr. Emily Hoover, Steve Poppe, Dr. Andrew Petran, Nathan Dalman, Esther Jordan, and Anna Mahoney for their contributions to this article. 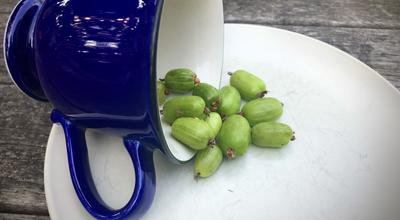 Quantities of quality: Fruit quality of kiwiberry in Minnesota

by Seth Wannemuehler and Emily Tepe 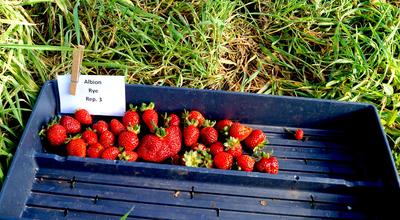 Living mulch and annual strawberries - about our research 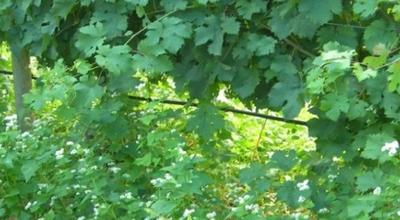