About our vineyard cover crops series

In this Vineyard Cover Crops series, we’re evaluating three under-vine cover crop species for use in Minnesota vineyards. This week we’re taking a look at white clover, and how its use as a cover crop affects various aspects of a vineyard.

Previous posts in this series:

White clover grows only three to six inches tall depending on the variety chosen (Hall 1993), which is ideal for vineyards in Minnesota with concerns around air drainage, shading, or cooling (Bugg et al. 1975). This means it can be left to grow throughout the growing season without any mowing or management.

White clover also has a positive effect on the vineyard microclimate by lightly insulating soils with a thick layer of plant matter (Meng et al. 2009). This insulating layer creates a moderate lag in temperature changes in the soil. The lag in temperature changes keeps temperatures cooler during the hottest summer months, and warmer during the fall months (Meng et al. 2009), which can be important for grape maturity (Lecourieux et al. 2017). This insulating effect can also benefit the fruit and vines on cold nights, by moderating daily temperature fluctuations. These factors make white clover an excellent cold climate cover crop candidate in regards to vineyard temperatures.

Clover is a legume, capable of fixing nitrogen for itself with the help of rhizobia bacteria (Hollander 2012; Schiedel 2016; Caradus et al. 1996). This nitrogen fixing capability can be beneficial for vineyards in areas with low fertility around Minnesota, such as soils dominated by sand and glacial till that are found in some of the central and lower portions of the state (Anderson 2018). In these soils white clover will be a good choice for increasing fertility and organic matter, assuming water and other nutrients are not limiting (Hartwig and Ammon 2002; Bugg et al. 1975).

In other soils found in the southern and central portion of the state, fertility is not a limiting factor, and may even contribute to excessive vigor (Filippetti et al. 2013). For these areas, clover may not be as beneficial as other crops at reducing vigor, but it will not be as much of a detriment as it may seem. When mineral nitrogen sources are available, clover uses that soil nitrogen rather than participating in the symbiotic relationship with rhizobia, which means less nitrogen is fixed (Caradus et al. 1996). Clover has even been observed to take up enough nitrogen to compete with other crops during the growing season, but this requires abundant soil nitrogen (Hollander 2012; Bugg et al. 1975; Hartwig and Ammon 2002). When concerns around vigor are focused on water surplus, white clover can also compete to reduce water availability to vines (Hardie and Considine 1976). This effect can be so strong that it can offset the growth benefits caused by nitrogen fixation (Hollander 2012; Schiedel 2016; Neilsen and Hogue 2000). Despite its ability to compete, white clover is a weak tool for controlling soil fertility and moisture in a range of soil conditions.

As a competitor with other weeds, clover is very successful as long as it can be established before taller weeds (White Clover n.d.; Hollander 2012). Once clover is established it forms dense patches that cover the ground and have a dense root structure (White Clover n.d.; Bugg et al. 1975). Clover, which spreads along stolons during the season (Hall 1993), is very successful in stopping the growth of seeds from other weeds (Hollander 2012). Even before it has taken over the area under the vine it will be able to compete heavily with other weeds for nutrients (Hollander 2012; Neilsen and Hogue 2000). For these reasons, clover is exceptional at weed suppression when seeded on bare soil, and will eventually outcompete many other plants if seeded into weedy soil, especially with the help of weeding or mowing (Bugg et al. 1975).

White clover has some benefits to a vineyard IPM program beyond its weed suppression abilities. White clover will produce a mulch, contributing to a healthy soil biome which can reduce the risk of various fungal diseases (Mundy and Agnew 2002; Jacometti et al. 2007). Additionally, white clover will not deposit an over abundance of plant material under the vines, which may be a risk in Minnesota where winter trunk damage is a regular occurrence.

The verdict on white clover in Minnesota vineyards

White clover is best suited for vineyards with:

Stay tuned for our next article in this series, Vineyard cover crops, part 4: Ryegrass.

Hardie, W. J., and J. A. Considine. 1976. Response of Grapes To Water-Deficit Stress in Particular Stages of Development. American Journal of Enology and Viticulture.

Meng, l. 2009. Effects of Inter-Planting Cocksfoot and White Clover as Cover Crops on the Microclimate of Apple Orchard.

Living mulch and annual strawberries - about our research 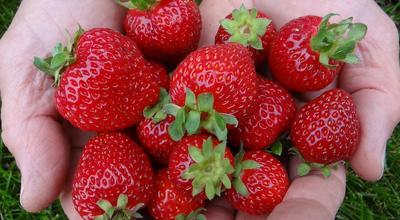 What's in a kiwiberry?